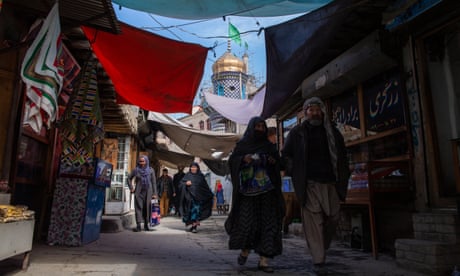 'There is less fear': restoration of Kabul repairs the ravages of war

People walk through the bazaar in Murad Khani, Kabul’s old town; an area that has seen much destruction over the last decades, but is now being restored. All photographs: Stefanie Glinski

Amir Gol first arrived in Kabul after fleeing his home – a Taliban stronghold – in Nangahar. He had no idea where to settle, so he rented a small mud house and started collecting and selling used plastic to make a living. Almost a decade later, little has changed for the 60-year old father of eleven. He sits cross-legged on a cushion outside the house he rents for 600 Afghani (£5) a month. Occasionally, he says, members of insurgent groups come to his neighbourhood, a settlement specked with poorly constructed mud houses and plastic tents in the city’s outskirts.

Amir Gol with his son Audul Rahman sit in front of their house.

“They try to recruit us for money,” Gol says. He admitts that cash would help the family, but says he’s setting a positive example for his children. “Besides that, even during this war, Kabul is starting to change. It’s finally developing and becoming more organised. I want my family to be part of this change.”

Barely built for a million people, Kabul, now has close to five million residents with the majority – 80% – still living in informal, unplanned areas such as Gol’s. More than one million properties still need to be officially registered, according to City for All, a government urban planning initiative.

Since the fall of the Taliban in 2001, Afghanistan’s urban population has grown by 2.5 million. The country is on the move, with people fleeing conflict, poverty and drought.

But while decades of war have destroyed much of the capital, an urban revolution is growing, creating small pockets of peace.

Just north of the Kabul river, in between traffic-jammed roads and steep hills lined with colourful houses lies Murad Khani, the city’s old town, dating back to the 18th century. Years of war, neglect and soviet ambitions of modernisation turned the once prosperous neighbourhood into a garbage dump, with much of the hand carved wooden designs rotting away. Today, Murad Khani is slowly coming back to life.

In Murad Khani, Kabul’s old town, 150 houses have been restored and renovated in the original style with elaborate wood carvings.

It started as a community effort in 2006 and since then, 150 houses have been restored and renovated. “Every skilled person in the neighbourhood came to work, hoping to maintain as much of the old structures as possible,” explains conservation architect Boris Bogdanovic, who works for Turquoise Mountain, a foundation that has largely financed the project. “It’s easy to knock down and restore, but it’s harder to work with what’s there and rebuild,” he adds.

Murad Khani is home to about 550 people who once again live in a labyrinth of old brown mud houses with elaborate wood carvings and a vibrant bazaar with a mix of shopkeepers, jewellery makers, food stalls, and fresh popcorn vendors.

Abdul Baqi, a carpenter master who helped restore the neighbourhood’s buildings, now works in the midst of it all, teaching the younger generation about traditional carving. With simple tools, he chisels round patterns into pillars, furniture and wooden bowls.

Carpenter Abdul Baqi helped with the restoration of Murad Khani. He also teaches carpentry and woodcarving to Afghanistan’s younger generation. He says he doesn’t want them to forget their history.

“I don’t want our children to forget about our historical background. Both regime changes and war destroyed our country. As Kabul is growing, many modern buildings are put up carelessly,” he says. “We can’t forget about our architectural history and its beauty.”

While armed soldiers and police roam the area – like any other part of the city – a relaxed atmosphere prevails. “It’s a pocket of Kabul where you can have normalcy. People feel safe behind their walls and there’s a sense of communal reliance,” explains Bogdanovic.

Such restoring and registering of Kabul’s informal neighbourhoods has been both a challenge and a success. “Informal,” explains deputy mayor Shoaib Rahim, “means that those parts of the city were initially not planned properly. There aren’t enough hospitals, water sources, waste management arrangements, roads or even markets.” Many new arrivals built houses wherever they found empty land, but it’s something the municipality is now trying to tackle.

“We’ve had an unnatural population growth in those areas. This is wartime governance. We try our best and keep our fingers crossed,” Rahim adds, but also admits that land disputes have become a “national pastime” in Afghanistan.

“It’s often powerful warlords who steal land. That’s what happened to my family,” explains Negina Ali, a journalist who spoke on condition that her name would be changed. “It’s strategic. We legally purchased our property, but we can’t fight the warlords. For now we’re keeping silent about it, it’s too dangerous,” she says.

The hills of Kabul are lined with informal houses and neighbourhoods that haven’t yet been officially registered.

“It’s chaos and carnage,” explains Habiba Azimi, a government worker with City for All. “Warlords might show up with fake certificates and bribe authorities to get their way. Sometimes it results in the destruction and eviction of people. It’s unfair and we hope that registering and formalising neighbourhoods will help the issue.”

“The court system is still flooded with illegal land grab claims,” says Rahim. “New Kabul residents need to develop roots and by registering houses and starting to provide services, we hope to help them do just that.”

Allah Dad, who originally moved to Kabul from Herat to seek better employment opportunities in a down-spiralling economy, says that he has seen his neighbourhood change as soon as properties were officially registered this year.

I bought my house seven years ago, but we had no official ownership certificate. It’s made my family feel uneasy,” he says. “We were always scared that one day, someone would knock on our door, claiming the land was theirs.” A few weeks ago, the family’s house was measured and registered by the city’s municipality, adding it to a daily growing database of parts of Kabul that move from being informal to formal.

Women stroll through the bazaar in Kabul’s old town Murad Khani, where many restaurants, shops, jewellery makers and artists have set up.

Dad’s neighbourhood is evolving. Over the past year, water pipes were installed and small, privately owned garbage trucks have started to clean the streets. “Our whole street is being registered and it has changed people’s attitudes. It’s positive. There is less fear and it feels safer and more peaceful.”

Kabul has seen a growth rate of 10% throughout the last decade, according to UN Habitat. “By 2050, one in two Afghans will live in cities,” explains the agency’s Head of Communications Koussay Boulaich.

“The most difficult part was that we previously didn’t have a vision for Kabul even though the city kept growing,” says deputy mayor Rahim. “We finally set urban planning goals. We might be diverse, but we all want peace. I hope Kabul can help change the perception of Afghanistan on a global stage. It’s not just a narrative of struggle – but of achievement and constant change.”