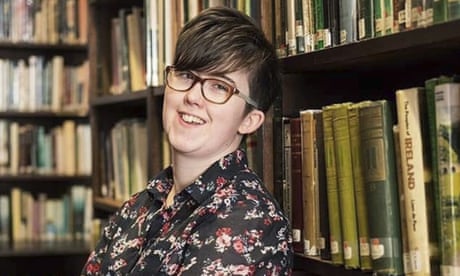 The journalist and LGBT activist Lyra McKee, who has died aged 29, had a knack for spotting untold stories from the procession of tragedies that stretched across three decades of Northern Ireland’s Troubles.

Born in the north Belfast “killing fields” where a quarter of all the deaths from that conflict occurred, McKee unearthed tales of forgotten victims whose deaths had been eclipsed by larger atrocities and massacres. Her forthcoming book, The Lost Boys, focuses on the young males, many of them children, who were abducted from the streets, murdered and buried in secret, and whose killers have never been brought to justice.

She was also exercised by the “lost boys” of the Irish peace process – the youths and teenagers left behind and let down in the years following paramilitary ceasefires, the Good Friday agreement and the power-sharing government in Belfast.

McKee investigated stories of young men and women who were alienated from peace and political arrangements designed to bring the Troubles to a lasting end. So it was a terrible irony that someone born only four years before the IRA declared its first cessation of violence in 1994 should have died due to the actions of some of those lost boys of post-ceasefire Northern Ireland.

McKee was fatally wounded when a gunman from the anti-peace process New IRA opened fire with a pistol on police lines in Derry. According to footage released by police, the gunman, like so many of the New IRA’s recruits in the north of Ireland’s second city, the citadel of hardline dissident republicanism, seems to have been barely out of his teens; probably not even born when the Good Friday agreement was signed in 1998. It appears that McKee lost her life at the hands of one of the young boys who have been recruited, indoctrinated and radicalised by the most lethal of the armed dissident republican groups.

McKee had moved to Derry to be with her partner, Sara Canning, and was at the scene of the riot in the republican Creggan area of the city as part of research she was conducting into the dangers of frontline journalism. She had been due to speak at an Amnesty International event next month on the perils of reporting conflict.

For her generation, it was never meant to be like this: McKee grew up in a society that was promised peace, prosperity and stability. Yet she also uncovered disturbing evidence that all was not sweetness and light in post-conflict Northern Ireland. One of her investigations reached the US current affairs magazine the Atlantic. In her article, Suicide Among the Ceasefire Babies, published in 2016, McKee revealed alarming figures showing that suicide rates were soaring in the province. By 2014 more people had taken their own lives in 16 years of peace than had killed themselves during three decades of Troubles-related violence.

North Belfast, where McKee was born and grew up, was still suffering from the toxic backwash of sectarian division during her formative years. At St Gemma’s high school, she published her first article in the school magazine when she was 14. In 2014 McKee wrote a letter to her 14-year-old self, which was turned into a critically acclaimed short film. The mini-documentary reflected not only her own struggles as a gay teenager but the plight of the entire local LGBT community in a conservative society that still prevents gay couples from marrying.

Ambitious and driven, McKee carved out a career in the cut-throat world of freelance journalism in Northern Ireland, yet remained a warm, jovial and sociable person with an eclectic range of friends. Her favourite way to befriend you, according to the American blogger and academic Barton King-Harman Creeth, was online. “Like so many she connected with you via social media,” Creeth said. “Yet once you met her in person for the first time she was infectious. After meeting she would enter your life in full. I can’t fathom that I won’t hear again that amazing cackle she had when she laughed even though she was such a small, frail person physically.”

Another friend was Ann Travers, whose sister, Mary, was shot by the IRA in 1984 in an attempt to assassinate their father outside church. Travers, like so many who encountered McKee, said her key quality was “simply that she had good emotional intelligence”.

In recent months McKee was trying to steer her writing in a different direction, having met executives from Netflix to discuss scripts for a potential television series based on her true crime stories of the lost boys’ disappearances. She was preparing to travel to New York next month.

Singled out by Forbes magazine in 2016 as one of the top 30 people under the age of 30 in European media to watch out for, McKee’s career and personal life had been thriving. In death she has become a symbol both of the new Northern Ireland – non-sectarian, radical, egalitarian, open, liberal – but also of how its violent past continues to haunt the present.

McKee is survived by Sara, and by her mother, Joan, and five siblings, Gary, Joan, Nichola, David and Mary.