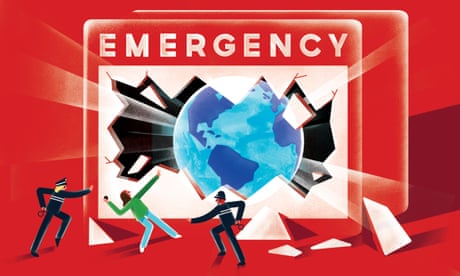 At 68, my climate activism made me a criminal. But I refuse to give up | Angie Zelter

I am now 68 years of age but when I was 21, in my final year at university, I became aware of major problems then facing the world – war, poverty, acid rain, ozone depletion, desertification, deforestation, species loss, civil and military uses and abuses of nuclear power, pollution, population growth, consumerism and the climate crisis. I was determined to devote my life to helping solve these problems. After spending three years in Cameroon, learning about deforestation for timber and cash crops such as palm oil, and the exploitation of the rich resources of Africa to the detriment of locals and enrichment of corporations and western societies, I returned home to the nuclear weapons crisis of the cold war.

I joined the Greenham Common protests, founded the Snowball civil disobedience campaign and then later the anti-nuclear weapons group Trident Ploughshares. I also became involved in work on the climate crisis. I learned that everything is connected and that it all has an impact on the climate, on biodiversity and on the sustainability of life on Earth. I discovered more about how our reliance on fossil fuels was causing the greenhouse effect and soon joined with climate scientists and local environmentalists to start a group in Norwich that tried to educate the public.

We put up maps showing how much of East Anglia and London would be under water as temperatures soared and the sea levels rose. This was in the early 1980s. We concentrated on what individuals could do to lower their carbon footprints – by putting up solar panels, changing lightbulbs, practising recycling and re-use, eating less meat, using public transport, shopping carefully and locally, and consuming less.

After discovering the impact that UK timber imports were having on the loss of old-growth forests and their biodiversity, I even got involved in carbon sinks and sustainable forest management. I worked with major UK timber importers to persuade them to stop importing timber stolen from indigenous reserves in South America and Asia.

But of course individuals changing their personal lifestyles was not enough. Governments had to get involved and make systemic changes. However, very few people and governments listened to us. We were Cassandras, considered doom-mongers, nihilists, mad. But if governments had acted then, we would not be at crisis point now.

I cannot really understand why those in power have refused to act. After all, it is their world, too. I know politicians are relentlessly lobbied by the extractive industries, that there is a revolving door from politics and the civil service to the oil and aviation industries. But when our society and ecosystem collapses around us, none of us will be able to eat, drink, or breathe money.

We know what to do to tackle the climate crisis, but it is not being done. Yet to be depressed and to lose all hope only makes the problem worse. I am fearful for the future for myself, for my family and for all living creatures on this fragile planet. I believe there is a real and substantial threat to all our lives and that, in accordance with the science, urgent and systemic changes to our society must be taken now to mitigate the danger.

Over the past 40 years I have tried everything I could think of to create the changes necessary to combat the climate emergency and prevent catastrophic collapse. That is why I took part in a peaceful road blockade in April with Extinction Rebellion, as a result of which I was convicted this week of a public order offence. I believed our action could persuade our government to implement three demands to help save our world for future generations.

First, to tell the truth by declaring a climate and ecological emergency and to work with other institutions to communicate the urgency for change. Second, to act now to halt biodiversity loss and reduce greenhouse gas emissions to net-zero by 2025. Third, to go beyond politics and be led by the decisions of a citizens’ assembly on climate and ecological justice. Following the wave of actions in London that began on 15 April, I believe that the necessity of our work, and its success in raising the alarm, are now widely acknowledged.

‘Politicians are relentlessly lobbied by the fossil fuel and extractive industries; there is a revolving door from politics, and the civil service to the oil and aviation industries.’ Photograph: Scott Olson/Getty Images

Like most people, I do not like being arrested. I did not want to spend three days in police cells refusing what I considered to be unreasonable bail conditions preventing me from returning to the protests. I do not enjoy spending time in courts, nor do I wish to spend scarce resources travelling from Wales to London for the hearings.

If the government had done its job of acting in the public interest by providing people with honest information about the scale and urgency of the threat, if it had addressed the threat instead of compounding it, I would not have needed to engage in nonviolent direct action.

Even though I did refuse to move when asked to by a policeman, I believed I was justified in remaining at the protest and taking part in what I considered to be a reasonable and proportionate response to the climate emergency. I believed that my action, alongside many of the thousands gathered in London that week, would help avoid disaster and lead to change. And this has been proved to be true. It has opened up a space for real debate about the climate emergency and what practical actions can be taken. Wales became the first country to formally declare a climate emergency. A few days later, the UK government declared a climate and environmental emergency.

I have been involved in persuading my own town council in Knighton, Powys, to declare a climate emergency and to hold public meetings to decide what practical actions can be taken. I believe that this would not have happened without the creative disruption we caused in central London.

Given that our fragile planet is undergoing a climate crisis that will soon culminate in chaos and massive loss of life, I had to do all in my power to bring about the necessary changes to prevent this catastrophe.

I hope you will agree that what I did was a reasonable, proportionate and necessary response to the emergency situation we are in.

• This is an edited extract of Angie Zelter’s statement at Hendon magistrates court on 25 June. She was found guilty of a minor public order offence and given a conditional discharge