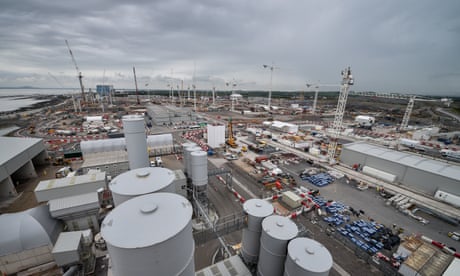 The Hinkley Point C nuclear project in Somerset has been widely criticised for being too expensive at £20bn. Photograph: Ben Birchall/PA

The UK should keep building large-scale nuclear plants and “mini-nuke” reactors to help reach a net zero carbon target by 2050, according to Britain’s biggest business group.

In a letter to the business secretary, Greg Clark, the Confederation of British Industry (CBI) said the UK’s struggling new nuclear programme has “an important role” in a low carbon economy “at the right price”.

It said a funding model for large-scale nuclear and small modular reactors would help provide economic benefits by encouraging foreign investment into the UK.

The government is struggling to agree a funding framework for a follow up to EDF Energy’s Hinkley Point C new nuclear project which has been widely criticised for being too expensive at an expected £20bn.

EDF will begin construction of the nuclear buildings above ground from Friday, and is on track to powering 7% of the UK’s electricity system by the end of 2025.

Rain Newton-Smith, the CBI’s chief economist, said it is “mission critical” that business, politicians and the public work together to create a net zero carbon economy by 2050.

The CBI letter was released after the climate goal officially became law on Thursday.

It also follows a flurry of government funding for nine new carbon capture pilot projects, which will trap and store emissions before they enter the atmosphere.

The CBI has also called on the government to “unblock” the pipeline of new onshore wind farms if it hopes to reduce the cost of moving to a zero carbon economy.

The business group warned that “hindering the continued deployment of the cheapest form of renewable electricity is hampering the goal of decarbonising at the lowest cost”.

“We must see action to unblock the substantial pipeline of onshore wind projects ready to be developed and built in parts of the country where they receive public support, such as Scotland,” the letter said.

It also called for government to help create a route to market for low-cost solar power, including projects that combine battery storage.

“Firms want to see a whole host of stable, long-term policies enacted – from building new nuclear power stations to scaling-up carbon capture and storage technology and infrastructure – that send markets a robust signal: the UK is open for green business, and is a world leader in tackling climate change,” Newton-Smith said.