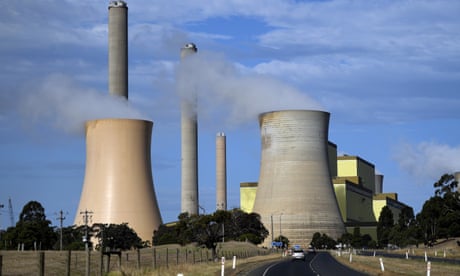 Superannuation funds and investors representing US$34tn in assets – nearly half of the total under management across the globe – have called on world leaders to bring in carbon pricing and phase out coal power to limit global heating to 1.5C.

Released ahead of a G20 leaders meeting in Osaka, Japan, the statement by 477 institutional investors urges world leaders to accelerate their response to the climate crisis to ensure the goals of the 2015 Paris climate deal can be met.

“We reiterate our full support for the Paris agreement and strongly urge all governments to implement the actions that are needed to achieve the goals of the agreement with utmost urgency,” the statement says.

It calls on leaders to strengthen international commitments, release long-term strategies to cut emissions and plan for a just transition to a low-carbon economy.

It would mean setting a deadline to phase out thermal coal electricity and fossil fuel subsidies, putting “a meaningful price” on carbon and committing to improve climate-related financial reporting standards.

Australia this week reiterated at United Nations climate talks in Germany that it would develop a long-term strategy by the end of next year consistent with limiting global heating to 1.5-2C, but has not committed to increasing the target it set in Paris.

Analysts say that target, a 26-28% cut below 2005 levels by 2030, is well below what is needed for Australia to play its part and the government does not currently have policies necessary to meet it. Australia’s emissions have increased year-on-year since 2015 after the government repealed a carbon price scheme introduced under Labor.

Business groups are among those to have called on the Coalition to reverse its opposition to carbon pricing. The Australian Climate Roundtable, consisting of business, investor, employer, farming, union, environmental and social welfare groups, have called on the government to do more to address climate change and manage an inevitable transition to clean energy.

Deanne Stewart, the chief executive of First State Super, said the investors’ call was in line with the view of regulators in Australia and overseas, which have described the climate crisis as a major and foreseeable risk that requires immediate action.

She said First State Super, with more than $90bn in assets, had a role to play in encouraging a strong response to protect retirement savings.

“This issue will require a coordinated, collective and collaborative response from governments, business and investors to ensure that critical changes are made now for the long-term interests of our members and the community,” Stewart said.