The four days up to January 15 were some of the hottest on record, according to the Australian Bureau of Meteorology, which has issued a series of warnings that cover the whole country. The town of Marble Bar in northwestern Australia has experienced 22 consecutive days of temperatures above 40°C, with the mercury hitting 50°C (122°F) at one point, according to CNN. 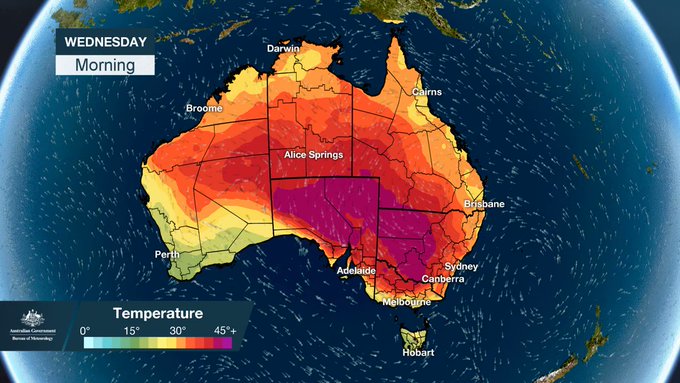 
The past 4 days are in Australia’s top 10 warmest days on record—and the trend looks like continuing today. The nights have been warm too, which is what defines #heatwave conditions http://ow.ly/LKhV30nkqMR  Stay cool, check on loved ones & follow advice from health authorities

A health alert was in place across Sydney and New South Wales, with residents warned to stay indoors and keep hydrated. The state’s Director of Environmental Health, Dr Richard Broome, said:

“We know that conditions like these can cause severe illness, hospital admission and even deaths. People over 75, people with chronic medical conditions and people who live alone are particularly vulnerable.”

Sydney residents have also been warned against ‘non-essential travel’ on the city’s rail network. New South Wales Transport Minister Andrew Constance said: “I’m expecting, given the challenge with the heat, we might see some disruptions to the network and we’ll respond accordingly should that occur.”

But the heat is affecting the whole country, from Perth in the west to Brisbane in the east as a mass of hot air from the interior of the country spreads out, fanned by winds which are pushing it toward some of the most densely populated areas.

Things have got so hot, the weather is disrupting major sporting tournaments. At the Australian Open tennis tournament, Andrea Petkovic of Germany collapsedduring her first-round match against Romania’s Irina-Camelia Begu, saying it was “heat-related”.

British player Heather Watson told the media she too had been affected by the heat while playing Croatian 32nd seed Petra Martic.

Being held at the height of the southern hemisphere’s summer, this isn’t the first time the Australian Open has seen people wilting in the heat. Last year, people also collapsed and complained of heatstroke at the Grand Slam.

In 2014, 1,000 spectators were treated for heat exposure and play was suspended under the tournament’s extreme heat policy, which gives referees the power to extend breaks or even decide it is too hot to play on.

The world of cycling has also been hit by the heatwave. The first big event of the professional cycling season is the Tour Down Under, but the Novatech Stage 2 (Norwood to Angaston) has been shortened by almost 30km due to the heat.

“The safety and welfare of the riders, spectators and everyone involved with the race is always our primary concern,” said Race Director Mike Turtur.

The heatwave might also be causing fish to die in vast numbers. Nearly 1 million fish were found dead in the Darling River, Menindee, New South Wales in the first week of January. This was the result of a combination of heatwave conditions, drought, and algal blooms meaning waterways are starved of oxygen.

The Minister for Regional Water, Niall Blair, said: “We’ve got high temperatures right across the state and a lot of poor water quality situations particularly brought on by the extended drought so unfortunately, we are expecting that we may see more fish killed.”

There have also been reports of colonies of bats dropping out of trees in Adelaide due to the heat, after an estimated 23,000 spectacled flying foxes – around one-third of the species – died in Queensland’s heatwave in November.

It’s also causing havoc for fruit farmers in South Australia, as stone fruit like peaches and nectarines are said to be “cooking from the inside” and spoiling before the harvest.

“The stone burns them, which means they burn on the inside, they become squashy and you can’t use them,” Dried Tree Fruits Australia Chairman Kris Werner told ABC.

A study carried out by Australian campaigning group 202020 Vision highlights how hyper-local micro-climates are part of the problem. Heat loads in cities are not shared evenly among neighbourhoods, with temperature differences of as much as 20°C found between adjacent and otherwise identical suburbs.

The report highlighted how some of these urban heat islands are now merging together and covering much greater areas, referred to as “urban heat continents”.