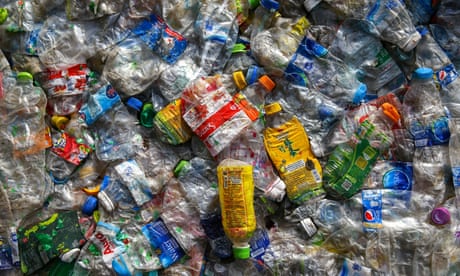 The climate costs of a plastic planet | Carroll Muffett

Every stage of the plastic lifecycle releases harmful carbon emissions into the atmosphere, contributing to global heating

‘In 2019, plastic production and incineration will add over 850m metric tons of greenhouse gases to the atmosphere – equivalent to the emissions from 189 coal-fired power plants.’ Photograph: Athit Perawongmetha/Reuters

Plastics are among the most ubiquitous materials in our economy, our lives, and our environment. They are also among the most pervasive and persistent pollutants on Earth.

In recent years, stark images of beaches, waterways and wildlife filled with plastic have spurred demands for action to address plastic pollution. These calls are coupled with growing concern that plastic and its toxic additives pose serious risks to human health at every stage of the plastic lifecycle. Far less attention has been paid to the impacts of this same lifecycle on the Earth’s climate. This is a dangerous oversight.

From catastrophic wildfires in California to searing heatwaves and record drought in India, the scale and growing severity of the climate crisis are undeniable. The Intergovernmental Panel on Climate Change warns that humanity must limit warming below 1.5C or face far greater and potentially irreversible climate chaos. To achieve this, we must cut global emissions 45% by 2030 and reach zero net emissions by 2050.

A recent report by the Center for International Environmental Law and partners shows that plastic’s rapidly rising emissions put these critical goals at risk. In 2019, plastic production and incineration will add over 850m metric tons of greenhouse gases to the atmosphere – equivalent to the emissions from 189 coal-fired power plants. By 2050, these emissions could rise to 2.8bn metric tons, equivalent to 615 new coal plants.

Why are these emissions growing so rapidly? Because plastics are made almost entirely from fossil fuels. Natural gas, oil and coal account for 99% of what goes into plastic. Thus, plastic’s climate impacts begin not in the oceans, but at the wellheads and drillpads where plastic is born.

Moreover, refining those raw materials into plastic is among the most energy- and carbon-intensive of all industrial processes. In 2015, just 24 ethylene facilities in the United States emitted as much carbon dioxide as 3.8m passenger vehicles. Globally fracking to produce ethylene produced as many emissions as 45m passenger vehicles.

The North American fracking boom is poised to make this situation much worse. Fueled by cheap fracked gas, Exxon, Shell and other petrochemical producers are massively expanding the infrastructure for making plastic. The American Chemistry Council projects that the industry will invest over $200bn in more than 330 new or expanded facilities by 2025. Just one of these facilities, a massive ethane cracker being built by Shell in Pennsylvania, could emit up to 2.25m tons of CO2 yearly.

Nor do emissions end once plastic’s useful life is over. While the carbon emissions associated with recycling are minimal, less than 9% of plastic is recycled annually. Effective recycling rates are lower still. As indicated by China’s recent ban on plastic waste imports, much of the plastic waste that has been sent to Asia for recycling has no economic value. It was and always has been just trash. In the face of China’s import ban, communities are increasingly turning to incineration as the way to deal with that trash. This incineration alone could add 4bn metric tons of carbon to the atmosphere by 2050.

If growth continues on its present trajectory, plastic production, use and disposal could create 56bn metric tons in cumulative greenhouse emissions by 2050 – consuming a staggering 13% of the Earth’s entire remaining carbon budget.

The climate impact of plastic that escapes into the environment is harder to quantify, but may be even more significant. Research demonstrates that the 57tn microplastic particles at the ocean’s surface continually release small amounts of greenhouse gases – and will continue doing so indefinitely. The climate impacts of this are difficult to quantify because those surface particles represent only a fraction of 1% of plastic in the ocean. Nor do they include the massive amounts of plastic on beaches, riverbanks and farmlands worldwide that are releasing greenhouse gases even faster.

More troublingly, scientists have found that microplastics are interacting with and often negatively affecting plankton in ocean basins worldwide. These microscopic plants and animals form the foundation of ocean ecosystems and also create the biological carbon pump that makes the oceanic carbon sink function. This raises the currently unquantifiable but deeply troubling prospect that rising plastic pollution could disrupt the Earth’s largest natural carbon sink, further accelerating the climate crisis.

Whether measured by its impacts on the climate, environment, or human health, the rising flood of disposable plastic creates risks humanity can no longer accept.

Just as the roots of the climate and plastic crises are interlinked, so too are their solutions. Simply put, it’s time to break free from plastic. We must end the production of single-use, disposable plastic, stop the development of new oil, gas and petrochemical infrastructure, and accelerate the transition to sustainable, circular economies and zero-waste communities.