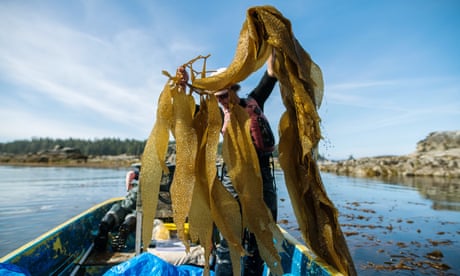 While farmers in much of the US spend the late spring patiently waiting for their crops to mature, a small band of sea farmers have taken to the cold ocean waters of Alaska to harvest the state’s newest cash crop: kelp.

Huge demand for seaweed, hauled up in slimy green bunches from the Pacific Ocean, has kickstarted an industry that existed as a mere fantasy only five years ago.

“There’s lot of interest in sustainability,” says Beau Perry, head of Blue Evolution, a California-based company at the centre of Alaska’s nascent seaweed boom. “As we deal with climate change and the movement towards plant-based diets, all of those trends play towards seaweed being a new sort of star ingredient.”

In recent years, farmers in Alaska have begun growing sugar kelp and ribbon kelp – two species that occur naturally in the ecosystem of remote communities like Kodiak and Ketchikan. With a $6bn (£4.7bn) global market for seaweed, residents are hopeful that kelp farming is a sustainable way to cultivate – and harvest – the coveted aquatic plant.

“There’s huge potential in Alaska. There’s so much space and it really fills an interesting niche,” says Alf Pryor, co-owner of Kodiak Kelp Company. “There’s a lot of potential for tons of different kinds of products … [I] see it taking off pretty quickly.”

A career salmon fisherman, Pryor along with his wife, Lexa Meyer, were drawn into the kelp business recently as a way to supplement their income. But interest in kelp farming is now so intense that Pryor believes a new farmer might have to wait up to three years for the necessary permits.

Unlike in other parts of the world, where wild kelp is harvested by ships, Alaska’s aquatic plants are grown by farmers in a months-long process, which begins in the dead of winter.

After Pryor and Meyer find roughly 50 plants they consider ideal for breeding, the wild kelp samples are sent to a facility run by Blue Evolution. The company extracts spores from the kelp and grows seedlings on pieces of string known as “seed pipes”. These pipes are given to farmers, who then wind the string along long ropes, which dangle from a free-floating frame in the ocean. Over a six-month period, the spores mature before they are harvested in late spring.

Pryor’s experience as a gill-net fisherman helped him to switch to mariculture, including redesigning a 25ft skiff to harvest kelp more efficiently. Even with his technical knowledge, he’s found that farming requires constant vigilance, including a sharp eye for drifting rafts of bull kelp, rogue groupings of wild seaweed that can crash into the ropes of young kelp and tangle into the plants.

“It’s kind of a constant battle, trying to keep stuff out of the farm,” says Pryor, who monitors the young plants once a week over the winter with his team.

In early May, the couple harvested nearly 200,000 pounds of kelp from their operation, which spans 18 acres and uses nearly 50,000 feet of rope – one of the largest hauls of kelp in the history of Alaska.

Blue Evolution hopes to buy “at least 50 tonnes” of seaweed from farmers like Pryor and Meyer, says Perry – a five-fold increase on the company’s purchase last year, and a figure he hopes to double next year.

The plant is of particular interest as studies have demonstrated the effectiveness of seaweed in animal feed as a way of reducing methane emissions. It is also being tested for properties that can mimic fossil fuels or plastics.

In coastal towns like Kodiak, where the fishing industry is the main employer and incomes are seasonal, the burgeoning kelp farming industry is seen as a way for families to find work during slow periods.

“For small coastal communities, [seaweed farming] could be a big deal,” says Pryor. “Just from the farm that we did this year, we put between 30 and 40 people to work.”

Alaska’s experiment with kelp is nothing new: each year, hundreds of thousands of tonnes of seaweed are harvested around the world, with China and Japan leading global exports. But in recent months, the harvesting of wild plants has been dogged by controversy.

In summer 2018, the proposed wide-scale harvest of wild kelp led to a fierce row in Scotland, where environmental groups say the dredging of kelp forests could cause irreparable harm to marine life off the coastline because the plants play such a crucial role in preserving a healthy ecosystem.

In Alaska, companies are required to follow strict government rules on cultivation: strains of seaweed crops, taken from wild plants, must be grown within 50km of the source plant. This ensures genetic strength and diversity are maintained, says Perry, with salmon hatcheries in the state following similarly strict guidelines.

On the whole, any environmental damage from the cultivation of farmed seaweed – which requires wild plants be picked for spore extraction – appears to be “minimal”, says Matthew Bracken, an associate professor of biology at the University of California Irvine.

“Kelp have major benefits for the environment both naturally growing and growing in these cultures,” says Bracken. “When the sun is shining, [kelp plants] are going to absorb carbon dioxide from the water … And given increases in [carbon dioxide] concentrations in the ocean generally, this is a good thing.”

Because seaweed is seen as a tool for mitigating the damaging impacts of ocean acidification, Perry believes the product is good for the environment – and for business.

But for Bracken, the surge in cultivation also highlights major advances in understanding the life cycle of a kelp, which has long mystified researchers.

“It’s not like plants where you just put seeds in the ground. They have a complex life. You have to really understand that well and be able to then magnify it,” says Bracken. “It can teach us a lot about how life works.”